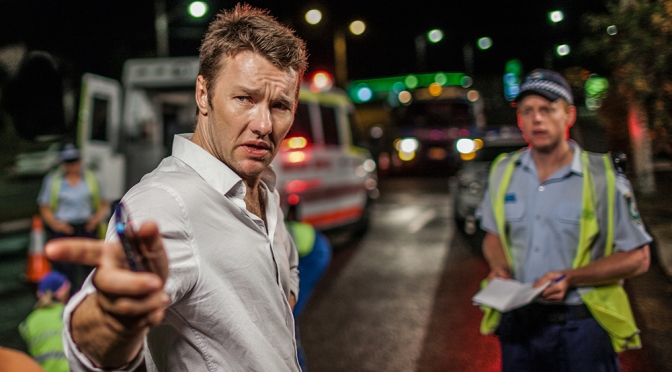 The line between good and bad can at times, be rather grey. With crime, this distinction comes up a lot and whether you are right or wrong, the road getting to that truth can be pretty bumpy. The latest Australian export Felony explores moral ambiguity and during the course of the film, the main character’s motives are explored and his moral compass, seriously tested. It isn’t a very good film but it does tackle an issue that can be very important. A human drama through and through, it does have a noble purpose and that, like most films, is to entertain. Unfortunately, this film doesn’t rank too high on the fun-o-meter.

Felony focuses on Detective Mal Toohey (Joel Edgerton) and the heap of trouble he steps in over an unfortunate accident. Upon completing a major drug bust, Toohey goes out that night to celebrate. With a few drinks in his system, he foolishly gets behind the wheel of his car. He then accidentally hits a kid riding a bike and a crime investigation soon starts. With Toohey not revealing his involvement with the victim and basically withholding information, Toohey automatically puts himself in the hot seat and his career and life in serious jeopardy.

With a pretty weak premise and not much in terms of clever dialogue, Felony is guilty of being very mediocre. The saving graces would have to be the performances by lead Edgerton who anchors the film admirably. He has a rugged likable way about him even though his character is something of a scoundrel, you can’t not sort of root for him. The always reliable Tom Wilkinson also turns in a strong performance as a crooked cop and friend to Toohey. His natural ability to transform into any role makes him one of the best older character actors working today. The weak link in this cast has got to be Jai Courtney who plays a persistent officer determined to bring Toohey down. His acting chops are limited and sadly, his good looks fail to distract from his lame performance. If you’re unfamiliar with this young man’s work, he played John McClane’s son in the fifth installment of Die Hard, yawn.

Felony starts strongly but eventually slips into the abyss of movie purgatory. It aims high with its premise but the formulaic plot prevents it from developing into the gripping crime drama it so desperately wants to be. Director Matthew Saville (Noise, The Secret Life of Us) has an okay style of filmmaking and he does well with close-ups of the actors faces. The tension is very apparent in his shots and this isn’t a complete waste. The real waste is the script which was actually penned by Edgerton. The man should definitely just stick to acting because the dialogue he’s provided here is a few notches below Law & Order and there just isn’t any originality. The story could have certainly used some fresh and witty dialogue. Unfortunately, the cons outweigh the pros in Felony and if you are without any other viewing options, then be my guest and give this below average film a go.