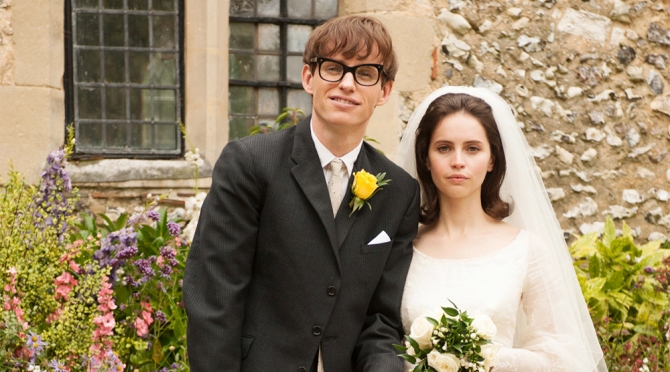 Very few people in the world are worthy of the moniker “genius”. To make groundbreaking discoveries that affect humanity and make a significant impact on the way people see the universe, well that’s very rare. Renowned English physicist Stephen Hawking is one such individual to achieve this and his life and work are the stuff of absolute legends. His research and theories questioned the very nature of time and space and shook the foundation of modern science. The new biographical film The Theory of Everything shines a light on the scientist’s personal life from when he was a young college student up until the present.

In the film, Hawking is portrayed by Eddie Redmayne, a truly outstanding English actor who actually has strong roots in theater. We see Hawking as a clever young Cambridge man who shows an almost effortless grasp of science and questions the very nature of the universe. He eventually meets arts student Jane (Felicity Jones) and the two of them form an instant relationship. The Theory of Everything chronicles Hawking and Jane’s life together as they struggle to live as Hawking develops a debilitating muscular disease (ALS). With hope guiding them through all their hardships, they face it head on and the results are quite spectacular.

Though this film has a few clichés found in many biographical dramas, it isn’t a by-the-numbers snoozefest. The Theory of Everything is a beautiful depiction of two people in love who overcome the odds and build a solid life together. Redmayne is a revelation and his performance is among the best of 2014. He without a doubt, deserves an Academy Award nomination because he fully embodies Hawking in almost every way. The young actor made a complete transformation and it is quite thrilling and at times, difficult to watch. Felicity Jones also gives a great performance and her quiet strength and beauty compliment Redmayne’s acting extremely well. In addition, David Thewlis provides some fine support as Dennis Sciama, Hawking’s teacher, mentor and friend.

With a superb cast, a superb director is also needed and James Marsh (Man on Wire, Project Nim, Shadow Dancer) is just the man for the job. He shot The Theory of Everything in a way that is graceful and simply lovely. The love story is filmed perfectly with the two lead actors stealing every shot with their on screen chemistry. Anthony McCarten’s (Death of a Superhero, Via Satellite, The English Harem) poignant script also adds a deep sense the realism of the film.

Based on Jane Hawking’s memoir Travelling to Infinity: My Life with Stephen, The Theory of Everything is a truly breathtaking tale and at times, heartbreaking to watch. Though Hawking has a terrible disease, he doesn’t let it slow him down and this film firmly establishes that. Hope is certainly on his side and it is at the forefront here and it’s really quite special. Also, this film should not be confused with 2004’s Hawking, which starred Benedict Cumberbatch. The Theory of Everything is a different take and a bittersweet depiction of Hawkings’ life, telling his story in a brilliant manner. There are many pros to this film. The most notable being the pacing which is perfect and the performances which are simply out of this world.