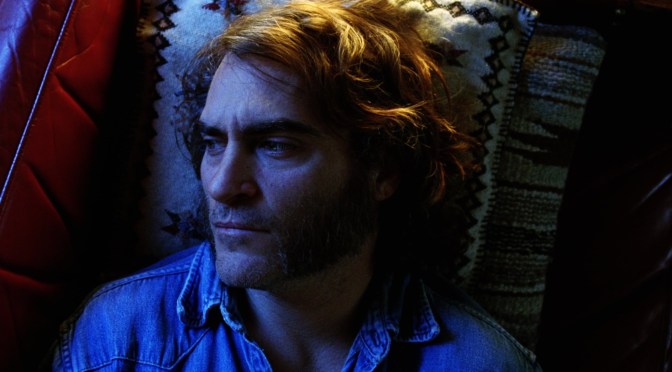 Paul Thomas Anderson is something of an enigma. His films explore dark themes and highlight the very worst of human behavior. From Boogie Nights to The Master, he places well known actors in his films which pushes the envelope a bit and they deliver performances that are certainly outside of their comfort zones. The new crime dramedy Inherent Vice continues Anderson’s trend of placing characters in precarious situations and squeezing awkward tension and off kilter humor out of many of the scenes. His latest offering isn’t exactly a classic and it tells a rather confusing film noir-esque story. Serious fans of Anderson and star Joaquin Phoenix should check this film out but even they might be detracted from the picture’s ridiculously complicated plot.

Inherent Vice takes place in a California beach community circa 1970 and follows stoner private detective Larry “Doc” Sportello (Phoenix). His ex-girlfriend Shasta (Katherine Waterston) shows up at his place and lets him in on a plot that involves her current lover Mickey Wolfmann (Eric Roberts) and his wife who wants to commit him to an insane asylum. Large sums of money and illegal drugs surround the plot and Doc is dragged into the middle of it all. Colorful supporting characters litter the story and the deeper Doc gets into the mysterious tale, the more complicated things get.

With such a confusing story and a bevy of interesting but barely used supporting actors, Inherent Vice is a truly frustrating film. It has all the makings of a likable Tarantino or Coen brothers-like film but falls very short because of its twisty plot. Phoenix’s Doc is a great combination of The Dude of The Big Lebowski and in some instances, Hunter S. Thompson. He is high on marijuana throughout most of the film and this poses a major question regarding reality and hallucination. How much of what we’re seeing on screen is real and how much of it is just a drug-induced fantasy?

Though Inherent Vice is a confusing overlong mess (clocking in at a whopping 148 minutes), it does feature some very strong elements. The film takes place in 1970 and the sets, cars, and costumes (nominated for an Academy Award) all reflect the era. Doc especially embodies the last of the 60s hippie with his military jacket, sunglasses, and sandals. He is totally comfortable in this garb and it only helps his stoner performance. The other saving grace of this film is the collective effort of the movie’s supporting cast. Just a few big names include Josh Brolin, Owen Wilson, Reese Witherspoon, Benicio del Toro, Jena Malone, Maya Rudolph (Anderson’s real life partner), Martin Short, and others. Brolin is probably the best of the bunch playing a straight-laced detective, the perfect foil for Doc and the scenes they share going toe to toe with one another are absolutely brilliant.

Inherent Vice is an ambitious film and could have been a modern day classic but it loses serious points for it ridiculous plot and it unnecessarily lengthy runtime. Paul Thomas Anderson should have cut this film down and made his adaptation of Thomas Pynchon’s novel of the same name (also nominated for an Oscar though I don’t know why) a bit easier to digest. There is a good film here, it’s just wrapped up in a lackluster package.