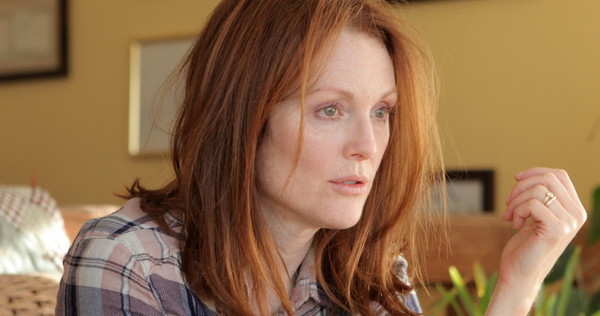 Alzheimer’s disease is an illness that affects millions of people worldwide. Memory loss is a major symptom and it is quite common among middle-aged to elderly people. The new film Still Alice takes a deeply personal look at a woman who has recently been diagnosed with the disease and is now trying to adapt (along with her concerned family) to the illness and how it is changing her life. Julianne Moore gives the performance of her career and it is a film that will probably hit home with many people, especially those affected by the illness.

Still Alice focuses on Dr. Alice Howland (Moore), a gifted linguistics professor at Columbia University. She is sharp as a tack and leads a highly productive and fruitful life. She is married to supportive John (Alec Baldwin) and she has typical parent-offspring relationships with her grownup kids Lydia (Kristen Stewart), Anna (Kate Bosworth), and Tom (Hunter Parrish). She resides in an upper middle class Manhattan brownstone and life couldn’t be better. That is until she starts forgetting words and gets lost on her morning jogs. At age 50, Alice is soon diagnosed with early-onset Alzheimer’s and the bulk of the film follows her as she attempts to live with this terrible disease.

Julianne Moore is superb in the lead role of Alice. You actually believe that she is suffering and trying to connect the dots. Her performance is not only genuine and heartfelt but it has an intense air of realism. This is the mission of every actor: to make the audience believe what is happening on screen is real. Moore pulls this off excellently and one can’t help but feel for her character. Still Alice is as much a personal journey as it is something her whole family must endure. Each member of the Howland family is profoundly effected by Alice’s illness especially Lydia, who is played by single-emotion actress Kristen Stewart. Lydia is in college and a bit disconnected from her mom but when the Alzheimer’s bomb hits, the two women are brought closer together. Character relationships such as this are at the core of Still Alice.

With such a long and impressive career, Moore is destined to win an Academy Award for her work in this film. She has already won a number of top prizes in the industry (including a Golden Globe) and she has nowhere else to go but up. Writer/directors Wash Westmoreland and Richard Glatzer have aided Moore in their careful guiding of their material which is based on Lisa Genova’s 2007 book of the same name. Many of the shots are either medium or close-up, shining the spotlight on Moore as she exhibits a wide range of emotions, mostly bittersweet acceptance of her unfortunate predicament. The script is also pretty standard dramatic fare and the lines are delivered effortlessly by the cast. Baldwin’s understanding husband could have been played by pretty much any other middle-aged actor working today. Having said that, this is Moore’s show through and through and brings a certain grace under pressure with her performance. The role of Alice seems to have been tailor made for the actress and it is certainly among the best performances of 2014.