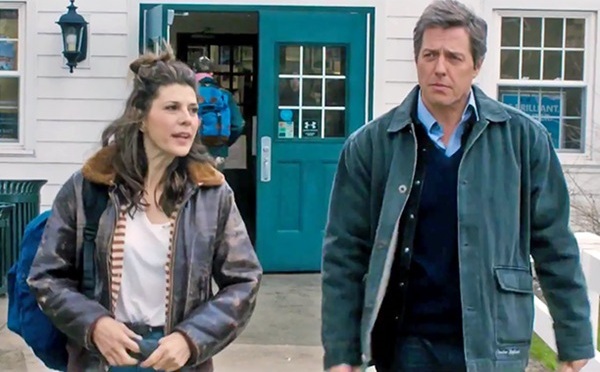 The woes of the one-hit wonder have been cleverly documented on film all too well. Movies like Barton Fink and Wonder Boys have tackled the subject exquisitely and numerous scribes throughout history have fallen victim to this unfortunate case of writer’s block. The new rom-com The Rewrite is based on the possibility that a once great creator can become a bit frozen when it comes to creating. Throw in a quirky plot, a pleasant setting and a superb supporting cast and you definitely have something worth checking out. It is a film that doesn’t break any genre rules or offer anything particularly new, just a cute story and a fine cast of actors.

Meet Keith Michaels (Hugh Grant), a British screenwriter who made it big in 1998 by winning an Academy Award for his script for Paradise Misplaced, a highly successful movie within a movie. Since his win, he never really achieved that the same greatness and this has left Keith in a bit of an artistic funk. His agent gets him terrible writing gigs penning screenplays for B-movies and utter drivel, that is until she gets him a job at Binghamton University in upstate New York as a screenwriting professor. Keith agrees to the position (though reluctant at first) and along the way, he meets Holly (Marisa Tomei), an older and quirky student in his class and you can pretty much guess what happens from there.

The Rewrite is an adorable romantic comedy that doesn’t try to be anything other than just that. The chemistry between Grant and Tomei is without a doubt, the true highlight of the film and every scene they share is nothing short of spectacular. These two seem to have been made for one another but then again most female leads opposite Grant have that effect. Tomei is particularly special here because she’s just so natural and Grant is his usual charming self. The incomparable J.K. Simmons has a supporting role as Keith’s college overseer and the brilliant Allison Janney plays a pompous intellectual who is constantly “at war” with Keith. Even funnyman Chris Elliot appears as a fellow English professor and the beautiful Bella Northcoate plays one of Keith’s seductive students. All in all, this is one of the stronger casts to be featured in film these days.

There is a lovely balance of humor and heart in The Rewrite and while the premise may feel familiar, the manner in which it is presented and played out by the actors is fresh and original. Hugh Grant is a perfect leading man, something cemented by 20 years of basically playing the same role. He’s been doing it for so long because quite simply, it works. He anchors the film excellently and Marisa Tomei is nothing but refreshing and downright cute. While The Rewrite will probably unfortunately fall into obscurity, it is a perfect Valentine’s Day flick with a smart script and flawless performances. Audiences should also note that this marks the fourth collaboration between Grant and writer/director Marc Lawrence. Their previous films include Two Weeks Notice (2002), Music and Lyrics (2007) and Did You Hear About the Morgans? (2009). The two have a fantastic working relationship and here’s hoping it lasts a lot longer.