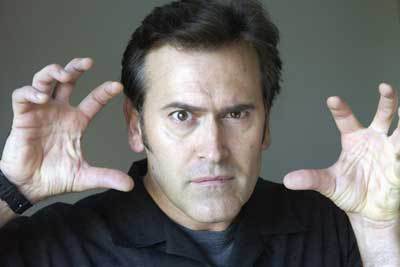 In 1981, the horror film genre was introduced to a new kind of horror. It was a film that relied on cheap gimmicks, unique makeup effects and a young actor who was terrorized all throughout the movie as well as its two superior sequels. That young actor, of course, is Bruce Campbell and ever since The Evil Dead, the actor has been an icon for the genre, big chin and all. Like most Comic Cons, Mr. Campbell was in attendance at Wizard World Chicago, not only to ham it up to his many adoring fans but to play host to a fun event and to plug his latest shows on the small screen.

The Evil Dead and Evil Dead II: Dead by Dawn are staples in the 1980s horror genre and at Wizard World Chicago this year, star Bruce Campbell hosted a very special reunion of some of the cast (including actor and director Sam Raimi’s brother Ted Raimi) and crew. It was a very interesting and eye-opening event that shed light on the films’ backstories and treated fans to some very unique commentary on the films. Reasons as to why the third installment Army of Darkness wasn’t addressed was briefly mentioned and it’s kind of sad that that movie was not discussed in more detail. Nevertheless, it was pretty cool seeing Campbell and the lot reminisce and joke around on stage.

Bruce Campbell is a natural performer, a man who goes on stage and pleases a crowd no matter what the venue. Comic Cons are where he shines brightest and Campbell also could care less about those who think negatively of him. He’s a man who enjoys the spotlight and the auditorium where this event took place was a collective fanboy clamoring with every joke and every Evil Dead and Burn Notice (TV show he’s currently on) reference he made. The man certainly knows how to work a room and with his loud white suit jacket and quasi-narcissistic persona filling the room with awesomeness, it was certainly a Wizard World night to remember.

Not only did the actors talk about the first two Evil Dead’s but Campbell made a semi shameless plug for two upcoming shows he’s involved in: Ash vs. Evil Dead and Last Fan Standing. The former is a STARZ original program which follows the events of Army of Darkness, placing Campbell’s antihero Ash in yet another war against the gruesome “Deadites” (soul-thirsty monsters possessed by the Necronomicon, the Book of the Dead). A clip was shown and the audience went nuts with applause. On top of that, Campbell is trying to get funding via Kickstarter for Last Fan Standing, a gameshow for fanboys, nerds and the like. Campbell is of course hosting. All in all, it was a Comic Con event for the ages, mostly because of Mr. Campbell’s brilliance on stage and a nice trip down horror movie memory lane.