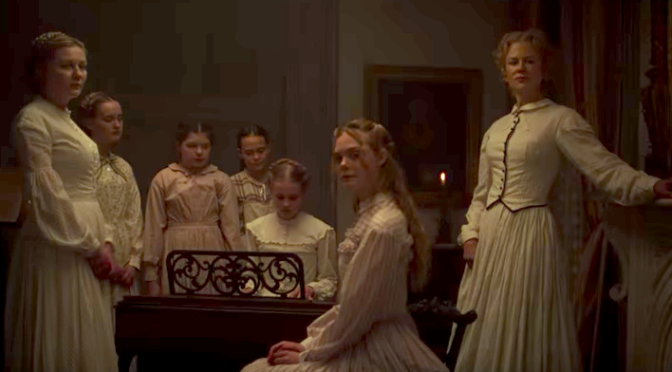 Historical dramas can go one of two ways. They can either be syrupy, melodramatic snoozefests or they can be absorbing and utterly exquisite works of art. With The Beguiled, we get something more in sync with the latter and with an absorbing story and strong performances, we have a film that goes beyond the average cinematic work and leaves an indelible impression on its viewer.

The Beguiled has a long history, starting in 1966 when author Thomas P. Cullinan’s penned the book. Known also as A Painted Devil, the book was so impactful that it inspired a motion picture in 1971. Fast forward to today where gifted filmmaker Sophia Coppola has made The Beguiled her own and presenting it to audiences of the 21st century. It is a unique story that has endured and undergone many interpretations.

Set in rural Virginia during the Civil War, The Beguiled focuses on Corporal John McBurney (Colin Farrell), a wounded Union soldier who has taken refuge under a large tree in the forest. He is soon discovered by a young girl picking mushrooms. McBurney is then taken to an all girls school to recuperate. The school is led by the uptight Miss Martha (Nicole Kidman), who has sheltered all of the young women in the house and is cautious about allowing McBurney to stay there. Eventually, sexual tension arises, resulting in a very dark and disturbing series of events.

While The Beguiled is a very quiet film, it has a lot to say. The main conflict is intense and revolves around the young women which includes a very subdued Kirsten Dunst and a seductive Elle Fanning. McBurney is thrown into this female-only world and with an injured leg and no hope for departure anytime soon. This sets the stage for one interesting yet controversial plot.

Filmmaker Sofia Coppola has taken the tried and true story of The Beguiled and really injected life into it. Her unique style and way of shooting has made this Civil War drama something really special. The look is great, being very authentic to the time period and the set, which is basically a creaky old house is utterly terrific. Every sound the floors make hints at something either very sinister or very sexy or both.

Colin Farrell is a knockout here and his performance as the hurt soldier in a foreign realm is a fantastic showcase for the gifted actor. Nicole Kidman is also is fine form as the prim and proper headmistress. We also get a decent performance from Kirsten Dunst who plays a teacher at the girls school riddled with emotional turbulence. Elle Fanning also shines as a young girl at the school.

With the book released half a century ago and a film adaptation made over 40 years ago, this is a more than appropriate time for a remake. Due to Sophia Coppola’s fresh approach and the actors all performing beautifully, The Beguiled is a gripping and exciting film that is guaranteed to impress. It’s also worth noting that this is yet another remake Colin Farrell has starred in. He was in reimaginings of Fright Night and Total Recall and he is set to star in Tim Burton’s live-action Dumbo which is currently in pre-production.