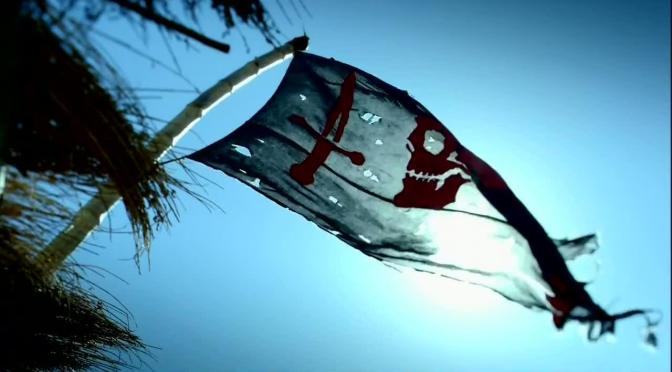 Toby Stephens: I play Captain Flint who is the captain of the Walrus. When we join in, historically he has been the most successful pirate on the island. He’s brought in the most money, but he’s hit a foul patch and his crew is becoming discontented and beginning to doubt his captaincy. There’s a guy on the crew who is trying to get him kicked out because these crews are democracies. They’d all be pressed, the crews and pirate ships have all been pressed to naval ships or onto merchant ships. They were taken away from their families, they were treated appallingly, they were paid very little, it was a very hard life, so when they became pirates, they imposed this real democratic system which was terribly inefficient because every time there was a decision to be made, they all kind of had to go by show of hands. The only time the captain had absolute power was in battle. So anyway, there’s this sense at the beginning of this that Flint is this terrifying figure, but he’s on the back foot, he’s in trouble, they’re going to vote him off, and he has to survive.

END_OF_DOCUMENT_TOKEN_TO_BE_REPLACED

Q: Is it safe to say that Treasure Island was one of your favorite books growing up?

Jonathan Steinberg: It was, yeah, who wasn’t? I mean, it’s one of the first adventure stories that you get exposed to, but I think what was fun for us was starting to understand that world. The Treasure Island world and the tone of it, while it’s become the basis for everything pirate that went after, it is not by any stretch a historical document. I mean, it’s a campfire story, and the reality that happened before it is really fascinating and something that’s far more grown-up and far more complicated and far more engaging I think. And so once we were able to dig into that, I think that’s, that’s when we knew there was something here.

END_OF_DOCUMENT_TOKEN_TO_BE_REPLACED

Diana Gabaldon: It would be nice to have a female character to play off of these guys, since it was essentially Scots vs. English during the Jacobi rising, let’s make her an English woman. We’ll have lots of conflict. So she walked into a cottage full of Scotsmen, one of them stood up and said, “My name’s Dougal McKenzie, and who might you be?” And without my stopping to think, I just typed, “My name’s Claire Elizabeth Beacham, and who the hell are you?” I said, “You don’t sound at all like an 18th century person.” So I found with her for several pages, trying to beat her into shape and make her talk like an 18th century woman. She wasn’t having any of it. She just kept making smart-ass modern remarks and she also started telling the story herself, so it’s all her fault that there is time travel.

END_OF_DOCUMENT_TOKEN_TO_BE_REPLACED 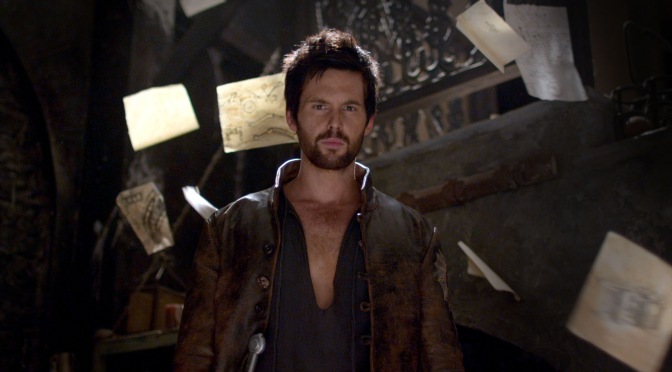 Q: You had mentioned this show, and I was excited from the get-go, and I loved the details, I love the historical, you know, the details. I don’t know how much time you’ve spent on the research.

David S. Goyer: A lot! I mean, we have a full-time researcher from the show, which is great and I spend a lot of time, just read a ton of shit. Excuse my French. Went to a lot of museums, you know, that kind of stuff.

END_OF_DOCUMENT_TOKEN_TO_BE_REPLACED

Q: So the second season seems to be very mystical, very fantasy, I’d say a lot more than last year.

Blake Ritson: I mean, it’s really, I think everything is bigger this year, really epic. It’s really ambitious. I think structurally, we kind of, it captures going in four different directions. I think it’s a new fun in terms of new alliances, catapulting characters you wouldn’t expect to co-exist together into these queasy alliances. So for example, one of the main thrusts of the series is the believers (not sure if he said believers, but that’s what I got), in terms of what you’re talking about, the mysticism. It’s this arcane compendium of forgotten knowledge which I and Leonardo believe could change the whole socio- political landscape of the world, so in the aftermath of the Pazzi conspiracy, we both think this is the answer. We both drive off across the Atlantic, racing across to the New World, to try to find the Book of Leaves, so as you said, one of the thrusts of the season is a possibly mythological, possibly real artifact… and yes, some interesting things happen. I mean, it’s really pushed to a breaking point. That’s another defining characteristic of the series, physically, mentally, spiritually, and I think with that, we get to glimpse into the dark recesses of the souls of a lot of characters, we get to pull in a lot of gaps that were hinted at in the first series. There’s a lot more information.

END_OF_DOCUMENT_TOKEN_TO_BE_REPLACED

Saturday started out as a party, well sort of. I interviewed two notable members of the DC animated universe. The first was producer/animator Bruce Timm, a legend in the animation game. His work on Batman: The Animated Series is the stuff of legends and during a roundtable interview, I sat with other journalists, soaking in all the awesomeness that is Bruce Timm. He talked about his career, his current projects and where he wants to go from there. Much of the same occurred with my interview of Andrea Romano, casting director for much of the DC animated universe. I also interviewed Briana Evigan about Grimm Fairy Tales and got to learn about the talented actress’ current projects.

END_OF_DOCUMENT_TOKEN_TO_BE_REPLACED

After easing into Day 1 of the New York Comic Con and re-familiarizing myself with the terrain of the Jacob Javitz Center, I was ready to tackle Day 2. Friday, October 12 was a day which saw an increased number in Con attendance. Nearing the work-free weekend, people flocked to the Con in an attempt to soak up all the geeky awesomeness which included celebrity appearances by Christopher Lloyd, Briana Evigan, and more, panels and whatnot. With many panels, the ones I attended on day 2 were very film and TV-oriented.

END_OF_DOCUMENT_TOKEN_TO_BE_REPLACED

The Jacob Javitz Convention Center, a modern marvel. This gargantuan facility is a few blocks wide and filled with huge chambers and many, many rooms. There is a ton of space for whatever you want. For the purposes of New York Comic Con, that space holds geeks, geeks and the paraphernalia they so adore. This is the seventh year of NYCC and it seems that with every year, the crowd grows bigger. Thousands of pop culture enthusiasts congregate here for what is one of the biggest entertainment events of the year.